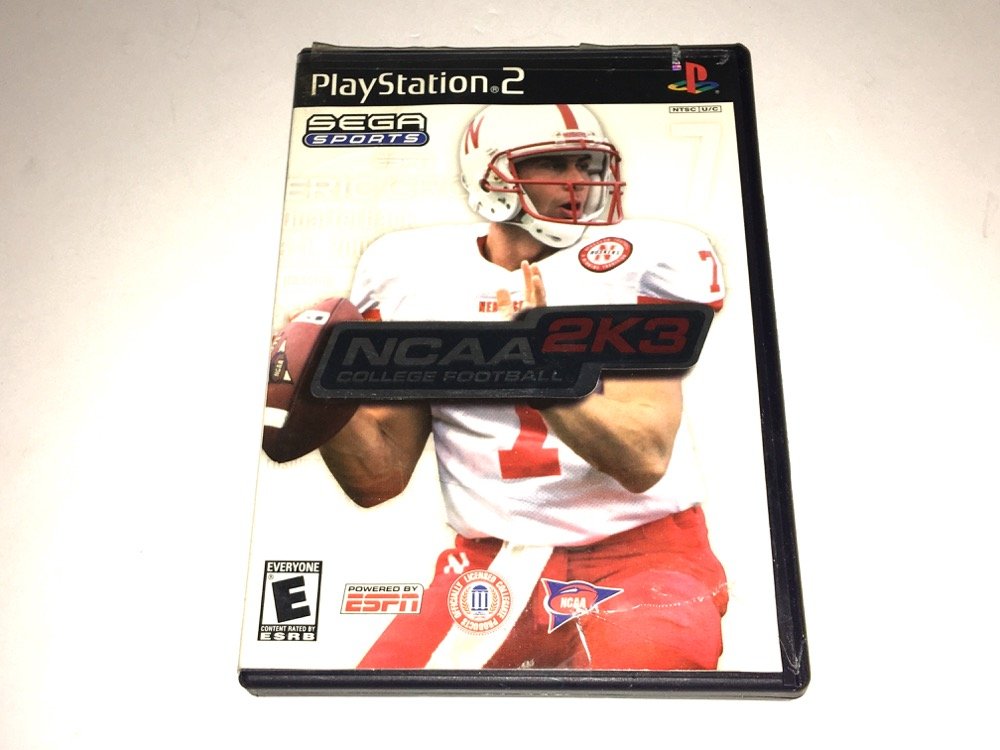 Be the big man on campus and the big playmaker on the field as Sega recreates the excitement of college football for the PS2. Go from the fields with plays like the wishbone and other triple options, to the sidelines complete with mascots and cheerleaders, to the stadium, jammed with rabid student sections, marching bands and more. Go behind the scenes as you assemble your team from the country's top prospects, prepare in off-season training and endure an ultra-competitive Division 1 Schedule. The Writers' Poll, Coaches' Poll and the BCS Standings track your progress throughout the season and determine which team will compete in the 25 post-season Pro Bowls. Strive for perfection and the spoils of the gridiron are yours, including the Heisman Trophy, The National Title and the BCS Championship.

NCAA College Football 2K3 re-creates the college atmosphere on the field, where you can execute plays such as the wishbone and other triple-option formations; on the sidelines, which are filled with cheerleaders and mascots; and in the stands, which come alive with enthusiastic student rooting sections and bands striking up fight songs. The ESPN-style presentation offers replays, scores, and more.

The new college-look player models and animations mean that, finally, NCAA football players have the proportions and physiques of real college-age athletes. You can choose from all 117 Division I-A teams and selected Division I-AA teams. The comprehensive legacy mode lets you assemble your football program from the ground up and build a Division I-A powerhouse. You can also create a school and join the conference of your choice. The game also lets you compete for the nation's top high-school recruits and develop your squad in the off-season with spring practice sessions.

You can compare your coaching effectiveness with history's greatest college coaches, and also save senior players from NCAA College Football 2K3 and draft them into NFL 2K3. New player names will appear on the backs of their jerseys. The authentic ranking system lets you track your team's performance and its shot at the national title with the AP poll, coaches' poll, and BCS standings. You will compete in the postseason classics, including all four BCS games: the Fiesta Bowl (the 2003 BCS championship game), the Rose Bowl, the Orange Bowl, and the Sugar Bowl. You will be surrounded with the sounds of pep bands playing university fight songs, students in the rooting section yelling school chants, and cheerleaders and mascots with hundreds of motion-captured moves.

skip to Main Content
We always work on something special. We probably already have the solution.
+1 8322950611 info@leghorngroup.com

LeghornGroup can protect your goods and assets with security seals and various products for tamper protection. The company can create bespoke, technical solutions to meet client’s requirements.

LeghornGroup ensures goods and people can be monitored using security products and integrated complete hardware and software solutions that allow the operator to monitor and intervene in real time, even remotely.

LeghornGroup’s understanding of authentication along with their innovative technical products and solutions allow users to uniquely and securely identify, goods, vehicles, containers, animals and people.

Packages are usually sent in 1/2 working days after receipt of the order with payment and sent by express courier.